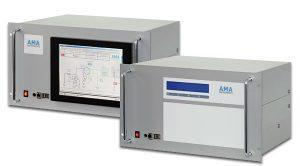 The GC 5000 BTX has been developed for the continuous monitoring of emission and imission levels of organic pollutants in ambient air in the range of C4-C12. The instrument is characterized by its compact design and its outstanding detection sensitivity in the ppt range.

The analyzer can be used for the legally obliged monitoring of benzene in ambient air according to the guideline 2000/69/EC of the European parliament and the council from November 16th 2000. At the same time often concentrations of other aromatic hydrocarbons like toluene, ethylbenzene and xylene are monitored as well.

According to the EU guideline 2002/3/EC from February 12th 2002, the VDI guideline 2100 and the guidelines of the Technical Assistance Document EPA/600-R-98/161 of the American environmental protection agency EPA from September 30th 1998 the analysis system is also suitable for the continuous monitoring of ozone precursors in the range of C4-C12.

A system for continuous monitoring of the complete range of ozone precursor from C2-C12 can be configured by combining the GC 5000 BTX and the GC 5000 VOC.